Straight from the prairies of Kortrijk, WHORSES have buckled themselves firmly in the saddle of the Belgian rock scene since they struck their first note of noise, somewhere back in 2017. These four cowboys found each other in a mutual quest for something new, different, crooked or quirky in music — rough, hard and uncompromising, but without knowing what exactly it was they craved for at the time.

It didn’t take Harry, Baptiste, Timotheus and Tijl long to stumble upon a sound quite their own: already with debut single ‘Rocky’, they frankly showed how to blend clenched and bone hard noise tunes with more sensitive and softer parts. That fresh, cutting edge sound was praised by press and public right away: WHORSES quickly played Sonic City, Ancienne Belgique, Trix, Vooruit and VOLTA amongst others, got featured by Humo and Red Bull Music and were invited as support act for Belgian cult bands like STAKE, Brutus and Raketkanon.

Not long after that intensity became their trademark, a fair amount of other influences started to drip in. Winter times, a rehearsal space in renovation and lockdown periods made the band reach for acoustic set-ups, resulting in more melody-based and kinder compositions — although in any case, artists like Pavement, The Beatles or Eliot Smith were already undisputable influences from the start. But don’t expect their country-infused songs to sound like your average singer-songwriter: WHORSES wouldn’t be WHORSES without a little edgy, weird or uncommonly intriguing angle on literally anything they create.

In fact, WHORSES deliberately explores all which can exist in their own universe, and is not afraid to experiment with whatever comes out. Similar to a band like WEEN, there are no limitations or fixed expectations in music for them, but only endless amounts of possibilities. Add to that a good portion of humour and subtle self-irony

— hello again, WEEN! – and you’ll quickly understand how the band’s self-titled debut came to be a double album, not limited in style or genre but filled with almost everything the four-piece worked on over the years.

It took the band only nine days to record the first full package of eighteen songs, retreating completely into Thomas Valkiers’ Hightime Studios during that odd Summer of 2020. And there, the magic happened: after months of pre production and other intense preparations, the four surrendered themselves completely to each other and their music, in all possible exuberance. They went into full cowboy mode, celebrating life, art and friendship in a true Burgundian way — as a grubby baby shower for a yet to be born bipolar but beautiful offspring. WHORSES is a band of extremes, bringing out the roughest and softest in themselves and in everyone who dares to dive into that pool of blunt, deep cutting, ever evolving and limitless sounds. A band, both live and on record both a possible noise splinter bomb as well as a funky foursome that dwells with comforting but slightly crooked country pop songs. 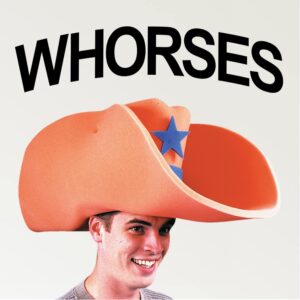