The band recorded their debut album just months after meeting and this sense of urgency shines through in their effervescent live performances, where Peers seductive vocals coalesce with Vandekerckhove’s austere beats to meld into a transcendent fury.

“Regardless of what sensual imagery alluded to from the annals of celluloid, the music’s droning dark melodies are haunting and infectious, not unlike whatever parasitic organism is devouring Peers and Vandekerckhove seemingly from the inside out.”

“the Skemer piece below, which pairs the Belgian duo’s AVANT! debut (Benevolence) with crimson-hued photographs and a commentary that cuts straight to the core of guitarist Mathieu Vandekerckhove (Amenra, Syndrome) and singer Kim Peers’ self-made universe….”

Sunseeker was track of the day at The Quietus & Nowness. 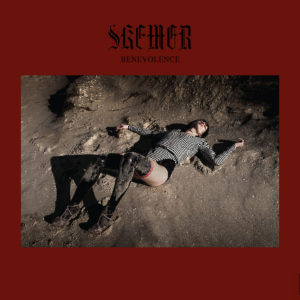