An obligation. That is the raison d’être of Rumours. Hannah Vandenbussche started experimenting with samples and midi-keyboards as a graduation project, inspired by bands like The Knife and genres like triphop. Her demo’s ended up with Stefanie Mannaerts. Triggered by the material and the freedom coming with it, they decided to keep experimenting, even after the obligations. To make it all tangible they called in wizkid Jonas Boermans as the third member of the band. Rumours comes straight from the underground noise scene, where everything goes and clarity isn’t an obligation – the perfect surrounding to continue onwards with their experimental journey. Pieter-Jan Cools joins the band and together they released the EP ‘Infant” (2016) – a collection of premature musicals vibes stemming from a band that is still learning to know each other.

In 2018, the world is introduced to their debut album called ‘Megamix’. The core theme: nostalgic summer music. Musical approach: anything the fuck they feel like playing. It is the result of months of working together in the studio, with every band member bringing demo’s, vibes and ideas to the table. Writing, rewriting. Saving and deleting. The finalizing and the recording of the videoclips happen in Ibiza. An impulsive but the only correct decision. What embodies a clusterfuck of electronic songs, serving as an ode the never-ending summer, more than Ibiza?

The foursome is on a high after ‘Megamix’ and build quite the national and international fanbase. They go all the way, are hard on themselves, stay vigilante and keep the bar high. Just on that peak – while writing a new record – the band decides to part ways with Cools. The sudden twist brings an existential crisis with it. It would lead to ‘How Many Roses’ (2020), an EP with which Rumours reconfirms its own existence. The tone is dark, the tenor persistent. Combative. Fearless. The EP is received well and Jan Berckmans is pulled aboard to bring ‘HMR’ on to the stage. Not much later the world locks down and every member is forced to fall back on themselves.

When the foursome meets again months later, it quickly stands out how that time alone made them re-discover music. Aphex Twin, breakbeats, nineties dance, jungle… They are all inspirations that are front, center and back when in the studio. But more than ever the individual member form a band and realize the importance of them being together. After a long time of being apart, they huddle together closer than ever. Hours, days, months they spend working on new music with those new influences at the base of all that as well as the work ethic that was always there: no half assing it. It’s everything or nothing. The band searches and find the common denominator, throwing away about seven records worth of music along the way. In 2021 there are two singles that get through the rigorous selectionprocess: ‘Stop Crying’ and ‘I’m not your hope’. The nineties influences are clearly present but the uniqueness of Rumours never dissipates.

Rumours bounces back. The band is ready for their next chapter to see the light of day. They took the time to immerse themselves in those influences and discover where they are headed musically; electronically radical. More than ever they are a quartet that senses and amplifies each over, a depth you feel in the new music. More than ever there is a will to connect with an audience and to take them along in the world of Rumours. In a world where everyone vibes ‘solo’, Rumours wants to bring people together and let the communityvibe rule.

Searching for that feeling of community in times of isolation while remembering the history the band has made the past 7 years ended up being the inspiration for ‘Nostalgia 2019 – 2021’. The first in a never-ending series of unreleased and reworked songs, played live by the foursome over the last few years. It’s the bands outing of what they were while proclaiming what they will be. A band of extremely creative and talented musicians.

Porsche 2019 is the first installment of this journey back in time and look into the future. Mesmerizing beats, captivating vocals, dreamy synths. 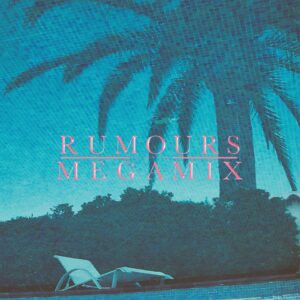