Pothamus was conceived in 2013 in Mechelen, Belgium. Ever since its birth, the band has been brewing their own mix of sludge, tribal, and post-rock elements into one enchanting trip.

With their debut album ‘Raya’ (2020, Consouling Sounds) Pothamus has proven itself to be one the most promising and ambitious new names in the heavy genre. ‘Raya’ is a 50-minute concept album weaving mesmerizing sounds with spiritual themes. Roaming the broad landscape of Amenra, OM, Swans, Godspeed You! Black Emperor, Heilung, and Wardruna, this trio forged their very own sound to give voice to their philosophical inquiries. Stormy riffs and tribalesque percussion respond to floating drones and abrasive bass lines. ‘Raya’ was recorded with producer Chiaran Verheyden, producer of Psychonaut (‘Unfold the God Man’, ‘Violate Consensus Reality’) and Hippotraktor (‘Meridian’).

The first edition of the ‘Raya’ vinyl sold out in less than a month, receiving laudatory praise by acclaimed media such as Decibel Magazine, and Metalstorm and Rock Tribune. Single ‘Varos’ got picked up by the classic radio show Duyster (Radio 1), while Colin H. Van Eeckhout (Amenra) featured ‘Orath’ in the Studio Brussel’s show ‘Ik Kies Belgisch’ in 2021. In 2021 Viso made into the 62th place in ‘De Zwaarste Lijst’ as one of the 666 best heavy songs selected by the listeners of Studio Brussel. The year after, the band exceeded all expectations by appearing two times: title track ‘Raya’ came in on #52, while ‘Orath’ landed on #28.

Since the release, Pothamus has been ploughing through music venues and festivals gaining new souls and media praise. The band performed at renowned genre-festivals Dunk Festival, Soulcrusher and Samhain while still winning over mainstream appeal with shows for broader audiences at Rock Herk 2022 and Absolutely Free Festival 2022. Approval of their rising status came when the band got selected for Eurosonic Noorderslag (ESNS), to showcase their work at one of the biggest professional music festivals in Europe.

Always pushing the boundaries, the band hosted their own ‘Rites of Raya’ album performance in one of the many historical churches in their hometown Mechelen. The show sold out in a couple of weeks. Other eminent venues include De Vooruit (Gent), De Muziekodroom (Hasselt), Trix (Antwerp), Pilar (Brussels), and Doornroosje (Nijmegen, NL). In 2020, Pothamus was chosen as support act for Amenra, and since then has been able to share the stage with a.o. Whispering Sons, dEUS, Millionaire, Mogwai, Stake, Bölzer, Wiegedood, Ufomammut, Big Brave, The Ocean, YOB, Psychonaut, and Brutus.

“Fusing all the best bits from sludge and post-metal’s most lauded heavyweights into one, Raya is a mighty odyssey for genre fans, or just those who want to disappear into a totally alien aura for a short time.” – Metal Hammer

“I can find zero fault with this album. This feels fresh, unique, heavy and relaxed. ” – Echoes & Dust

“Chilling, eerie, spooky, evocative. Pothamus is the sound of a ritual for the death of 2020” – Decibel Magazine

“Tribalesque chants, pounding drums and heavy repetitive riffage are the ingredients that make Pothamus a captivating band for sure. Add some oriental, sludge and post-element seasoning and you will understand they are highly hypnotic” – Dunk! Festival 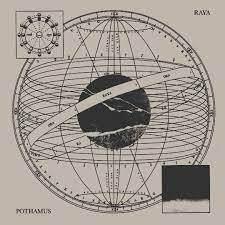