Active since 2013, Les Deuxluxes is a Montreal-based rock ‘n’ roll duo featuring vocalist/tenor-guitarist Anna Frances Meyer and multi-instrumentalist Etienne Barry. The pair sets the stage on fire and mesmerizes crowds wherever they go with their unique mix of gritty garage rock, soaring melodies and thrilling psychedelism.

Critically acclaimed in Quebec and abroad, their first album Springtime Devil was released in September 2016. Their recordings aren’t the only thing that attracts praise. The duo has distinguished itself in events of international repute including Montreal Jazz Festival, Festival d’été de Québec, POP Montreal, M for Montreal, GéNéRiQ, Festival International de Louisiane and SXSW.

Between 2016 and 2018, they toured Latin America (Chile, Brazil, Argentina, Mexico and Colombia) extensively, breaking the language barrier and attracting a large number of new fans. They have played continuously across Canada as well, and have toured in France and the UK where a majority of their shows sold out. During this period, the band also took SXSW by storm, gaining exposure in the United States and cementing their status in festivals of international repute like the Festival International in Louisiana. In 2019, Les Deuxluxes also performed at Roxy Festival in Guadalajara, Mexico and at Westway Lab in Portugal, where they caught the attention of media outlets like Milenio, Gigwise and The 405. In September, Les Deuxluxes surpassed all expectations by selling out all three of their shows at Reeperbahn Festival in Hamburg, making their debut in Germany an explosive event.

With their long-time collaborator Francis Duchesne, Anna Frances and Etienne are currently working on their sophomore album Lighter Fluid. Recorded entirely inside a 19th century church located in the heart of the Eastern Townships (Quebec), the album features a collection of eclectic songs recorded live that challenge the limits of their instrumentation and artistic universe. The new record is due out in February 2020.

“Westway Lab invited Canada to be the focus country this year […] It’s Les Deuxluxes, though, that catch our imagination the most. The two-piece employ tight, distorted riffs with snarling vocals which give a sense of defiance and an attractive amount of self-confidence without being too ego-driven. It’s a show that has the security on edge as we start transforming the back of the 800-cap modern amphitheatre into a moshpit, before going down to the front row and being starstruck by these two unknowns from Montréal. Immediate comparisons to The White Stripes and The Runaways can be made but there’s nothing watered down. They bring throwback garage rock sounds and make it fun and vital in 2019 which isn’t an easy thing to do. Having lead vocalist and guitarist Anna Frances Meyer first train as an opera singer definitely gives them an edge. As does her drummer, whose dress sense suggests a youth firmly into 70s rock and glam and psychedelia, since he simultaneously plays guitar and looks like a classic blues legend in the process. It feels utterly complete and ready for international domination.” – Cai Trefor, Gigwise

“Sometimes you gotta leave Canada to catch up with the Canadians. This Montréalais duo is the best thing to happen to dirty blues-rock in a long, long time. Anna Frances Meyer and Étienne Barry are also born rock stars.” – Ben Rayner, Toronto Star

“The clear standout of the Canada Country Focus is Les Deuxluxes, a riotous duo that high kick their way into the hearts of Westway LAB. Working with double the conviction in an attempt to overcome the extremely un-rock’n’roll surroundings of the aforementioned classical auditorium, with its soft seats and bourgeois ambience, singer Anna Frances Meyer is a constant provocateur, galvanising the sedentary audience into something mildly approaching a frenzy. Meyer and partner Etienne Barry duel on guitar, Barry hammering a kick drum with his foot all the while; they draw from glam, psych and punk but they operate at their own wavelength, a spiky, angular cool that earns a legit standing ovation as they leave the stage.” – Max Pilley, The 405

“While guitarist/percussionist/back-up vocalist Étienne Barry lays the most concrete of foundations, Front-woman/guitarist Anna Frances Meyer simultaneously slays the audience with her skills on the ax and pours honey on their wounds with vocals piped down from the gods above.” – I Heart Local Music

“Due to this juxtaposition of new and old, Les Deuxluxes, much like Springtime Devil, is a treasure which defies time to be one of the most innovative releases I have heard in quite some time.” – Gerrod Harris, Canadian Beats 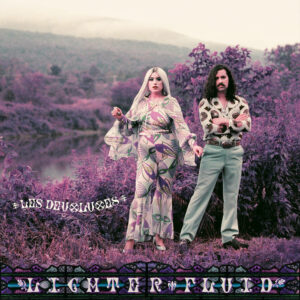 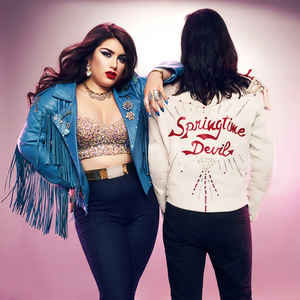