Weeks of speculation come to an end today as details of the new Kurt Vile album can finally be confirmed: One of the most critically and commercially acclaimed artists of the last decade will release Bottle It In on October 12th on Matador Records.

Today’s announcement is accompanied by the release of a new song titled ‘Bassackwards’, which follows previously released Bottle It In single, ‘Loading Zones’, an ode to the parking challenges in Vile’s native Philadelphia, described alternately as “Vile at his comforting, shaggy best” (The Guardian), and an “ambiguous rumination on small town life” (MOJO). The epic, loping ‘Bassackwards’ is the album’s beating heart and Vile’s most compelling evocation of how he sees the world: “I was on the ground circa Planet Earth, but out of sorts,” he sings over a gently psychedelic bed of backmasked guitars. “But I snapped back, baby, just in time to jot it down.”

Vile will hit the road this fall on an extensive global tour, with support from The Violators (Rob Laakso, Kyle Spence, and Jesse Trbovich). Commencing October 12th in Hamburg, Germany, the tour runs through mainland Europe, before arriving in major UK cities, including two consecutive nights at London’s Shepherd’s Bush Empire on November 6th and 7th.

In addition, Vile has confirmed a further run of worldwide tour dates for 2019 with The Violators. The full list of tour dates can be found below the Stephen Deusner penned bio.

Travel can inspire in surprising ways: Kurt Vile discovered as much making his first record in three years, the eclectic and electrifying Bottle It In, which he recorded at various studios around the country over two very busy years, during sessions that usually punctuated the ends of long tours or family road trips. Every song, whether it’s a concise and catchy pop composition or a sprawling guitar epic, becomes a journey unto itself, taking unexpected detours, circuitous melodic avenues, or open-highway solos. If Vile has become something of a rock guitar god—a mantle he would dismiss out of humility but also out of a desire to keep getting better, to continue absorbing new music, new sounds, new ideas—it’s due to his precise, witty playing style, which turns every riff and rhythm into points on a map and takes the scenic route from one to the next.

Using past albums as points of departure, Bottle It In heads off in new directions, pushing at the edges of the map into unexplored territory: Here be monster jams. These songs show an artist who is still evolving and growing: a songwriter who, like his hero John Prine, can make you laugh and break your heart, often in the same line, as well as a vocalist who essentially rewrites those songs whenever he sings them in his wise, laconic jive-talkin’ drawl. He revels in the minutiae of the music—not simply incorporating new instruments but emphasizing how they interact with his guitar and voice, how the glockenspiel evokes cirrocumulus clouds on “Hysteria,” how Kim Gordon’s “acoustic guitar distortion” (her term) engulfs everything at the end of “Mutinies,” how the banjo curls around his guitar lines and backing vocals from Lucius to lend a high-lonesome aura to “Come Again.”

These journeys took Vile more than two years to navigate, during which time he toured behind his breakout 2015 album b’lieve I’m goin’ down, recorded a duets album with Australian singer-songwriter-guitarist Courtney Barnett, opened for Neil Young in front of 90,000 people in Quebec, famously became a clue on Jeopardy, hung out with friends, took vacations with his wife and daughters.

In April 2017, he trekked out to Indio, California, to catch the Stagecoach Festival and sit in with his friends the Sadies (“my favorite modern band”). Inspired by Willie Nelson’s epic set, Vile spent a few days in Los Angeles working with producer Rob Schnapf at his Mant Sounds studio. The two had previously worked together on “Pretty Pimpin,” the leadoff track on b’lieve that became a number-one AAA radio hit. Their second collaboration was similarly inspired: Featuring backing vocals from Cass McCombs, the eleven-minute title track is full of ominous bass rumbles, hazy-steady drumbeats from Warpaint’s Stella Mozgawa, delicate harp stabs from Mary Lattimore, and what sounds like chewy distortion leaking out of a David Lynch flick.

Months later, when a lengthy Violators tour ended in Salt Lake City, Vile let the momentum carry him further west, where he recorded several more songs with engineer/producer Shawn Everett (Alabama Shakes, the War on Drugs) at The Beer Hole in Los Angeles. Other songs were put to tape during sojourns to Portland, Oregon, and to Greenpoint, Brooklyn, where fellow Violator Rob Laakso co-produced. The bulk of Bottle It In was bottled up at Tarquin Studios in Bridgeport, Connecticut, with Peter Katis (Interpol, the National) engineering and producing. Bottle It In captures the spontaneity of these impromptu sessions, revealing Vile as a diligent and singularly determined musician.

These recordings are the destinations, but the journeys were just as important, whether they gave him time with his wife and kids or an opportunity to get some writing done. “For a while I was terrified of flying, so I would be listening to whatever country songs I was obsessed with. I’d have George Jones blasting in my ears. Or, I would be reading something about country music. Or, I would start writing songs in that flash of being afraid, being swallowed by life. I’m up there on a plane drinking wine because like everybody else I’m afraid to die. And I wrote ‘Hysteria’ up there.” That new song, with its woozy guitar fanfare, captures mid-flight queasiness well, as Vile daydreams about escaping the flight: “Stop this plane ’cause I wanna get off,” he sings. “Pull over somewhere on the side of a cloud.”

Bottle It In is about place only insofar as it is about the people in those places: friends and family, bandmates and music heroes, colleagues and collaborators. There’s a lot of love in these big-hearted songs, a lot of warmth toward everyone in Vile’s orbit and even toward those whose paths he’s yet to cross. “Loved you all a long, long while,” he sings on “One-Trick Ponies.” “Looked down into a deep dark well, called all of your names.” The jangly country-rock tune serves as a valentine to… he won’t say, but he and Mozgawa and Farmer Dave Scher deliver a beautifully sympathetic sing-along chorus that invites every one of us one-trick ponies to join in.

As Vile prepares for another round of lengthy tours and countless shows, these songs should prove good company, reminders of the love and responsibility he has toward those he leaves at home and those he meets along the way. That makes the sentiments resonate more strongly and lends Bottle It In an emotional weight. “It’s like that moment on the airplane,” Vile says, “when you’re on your way somewhere and you have that burst of panic. When you’re terrified of dying, that’s when you want people to know you love them.” 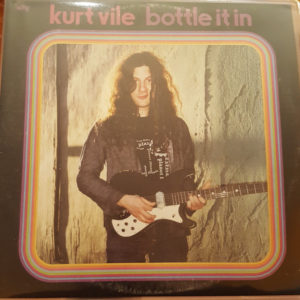 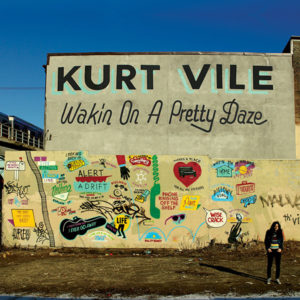 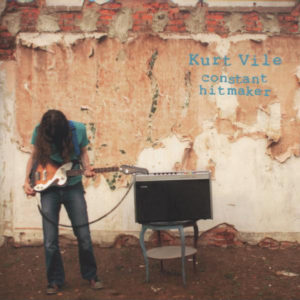