KAINA is a first-generation Latina, born and raised in Chicago. Apart from her parents and brother, she didn’t grow up around any other blood family in her hometown, which ultimately led to a detachment from her cultural identity. “I think ‘Green’ is the piece that connects it all for me,” she says. “I feel alone a lot, but I also know that it took so many people for me to exist and collectively, us as generations have seen many days and times and ‘moons.’ I am always connected even when I’m literally far away, or even lineages away — or my history has been taken from me, or I didn’t get to learn it.” While lineage has always been at the root of KAINA’s music, “Green” marks a pivotal moment for the 24-year-old; a moment where she finds peace with her sense of self.

From her debut EP, 2016’s sweet asl. to 2018’s 4U, and her debut album Next To The Sun, KAINA has continued to push this narrative through her brand of sweet-hearted optimism, which she uses as a means to connect with and lift her listener’s spirit. From collaborating with peers like Saba, The O’My’s, and Sen Morimoto, and through multidisciplinary work around the city with various organizations, she has found a sound for herself that is gentle, yet full of intent.

Songwriting has thus become a vital aspect of KAINA’s personal canon. “I don’t write songs until I feel it coming up,” she says. “I don’t really edit my songs either; I feel like I said what I said and meant it the way I said it.” A listener can feel the intimacy resonating in her lyrics, as she pens odes about love, legacy, and ancestry, and how those concepts become more complex as one grows older.

KAINA folds all of her fears and hopes about identity into Next To The Sun. Spanning nine songs, the album is indebted to Latin music while remaining bound to the soulfulness of Chicago. “Green” is a nod to salsa, while the bassline on the title track is an acknowledgment of Latin music’s sultry aesthetics; the Morimoto-supported “Could Be A Curse” — the album’s only feature — is akin to bolero. But on songs like “Ghost,” “What’s A Girl,” and “Waiting On A Day,” KAINA switches hats with ease, the album’s Latin-inspired sonics blending seamlessly with Chicago soul, R&B, and blues.

“Put me in the clouds, right under heaven, next to the sun / Wanna feel it all, the burn and the lesson, the fall,” she sings on the title track. Above all, Next To The Sun is cathartic, a space for KAINA to expose herself to the often painful process of self-exploration. With her, together, we experience life’s warmth and beauty, while also enduring its growing pains. 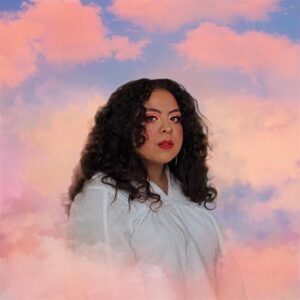