Gabríel Ólafs possesses an exceptional talent for telling a stirring symphonic story through neoclassical/ instrumental music. At just 19, the composer and pianist wowed viewers on Icelandic TV during his first ever live performance, where he was discovered by Björk’s manager Derek Birkett.

At just 14 years old he wrote ‘Absent Minded’ – an imagined theme tune and subsequent lead single from his forthcoming debut album of the same name, that came out on One Little Indian Records in August 2019. “I am very visually-minded, and I often compose to an imaginary story or character. You could say my album is a score to a non-existent film.”

The teenage pianist would admit to being somewhat isolated growing up in his small Icelandic hometown, creating cinematic moments in his head from mundane things he sees around and nearby the house; a poster of a French cyclist, his mother gardening, the harbour down the road, a female friend who is named after an Icelandic bird, ‘Lóa’. His home studio is his world, his family home his universe.

Ólafs is an expert in the art of tension, creating a lingering breath in between the gaps – something he observes about good movies. Single ‘Absent Minded’ expresses those lost-in-thought moments, the daydreams, the imaginary worlds we create in our quietest hours.

London in Stereo
“Icelanders seem to be on such a great creative streak in the classical and neoclassical world and Gabríel is certainly one to watch.”

Tiny Mixtapes
“within Ólafs’ young body lurks an old soul ready to take listeners into unexpected and fascinating directions for many, many years to come.”

GigSoup
“Gabríel Ólafs’ youth alone is enough to set him apart from the crowd; at 19, his debut album marks a mature initial statement that surpasses plenty of comparable records made by those senior to him… Fans of the genre will certainly find an intriguing new artist in Ólafs” 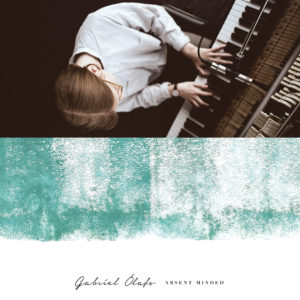