Dumb is the new smart. Don’t believe us? Look no further than this ridiculously prolific Vancouver quartet, who have somehow cracked the code on including quality with their quantity. Over the last two years, Dumb have self-released three albums of quirky, frenetic post-punk. While others might go stale, however, the band seems to break new ground with each new idea.

EnterSeeing Green, the band’s first full-length for Mint Records. The album’s 14 tracks were produced by Jordan Koop (Wolf Parade, You Say Party, the Courtneys) at the Noise Floor on Gabriola Island, BC. While it’s the band’s first time working on this relatively larger scale, Koop’s production has simply crystallized their ideas.

The result is a batch of songs that sound both urgent and timeless, referencing classic post-punk projects like DEVO, Pylon or the Mekons while placing them nicely within the pantheon of Canadian contemporaries like Ought, Fountain and Freak Heat Waves.

Musically, Seeing Green’s jagged guitars and punchy rhythm section lay a perfect basis for their lyrics, all of which explore the inherent absurdity of modern life. As frontman Franco Rossino says, “The album revolves around a confused and angry young person unknowingly being tossed around by the same western capitalist conditioning that we’ve all been raised on. Green in this sense refers to being a novice, as well as to money, envy, and growth. It’s meant to be somewhat of a self-aware exaggeration of some feelings in our every day lives that we often don’t want to admit to and may even lie to ourselves about. “At times paranoid and other times exuberant,Seeing Greendares you to dance and deconstruct. It’s a trim, explosive collection of songs that suggests these four will be cranking out hits for years to come. It’s time to get Dumb.

“Vancouver’s DUMB make loud, snotty, smartass indie rock with wirey guitars and buckets of attitude. It’s like a whole band made of Jimbos from The Simpsons and Eddie Haskels from Leave it to Beaver by way of Los Angeles 1980 new wave punk. (Except Canadian.) Their shouty, catchy songs rarely go past two minutes, but pack in maximum hooks and choruses.” – Bill Pearis, Brooklyn Vegan

“Seeing Green is half-sleepy and half-skittish, reminiscent of Desperate Bicycles only not as loosey-goosey. For the most part, unless you’re, say, Beat Happening, it takes a great deal of hard work to make what you do look easy, and Dumb are a glowing example of such an idea.” – Martin Douglas, KEXP

“Their track “Hard Sea” comes rampaging out of the gate with a squalling noise burst and bouncing, propulsive bassline, like James Chance jamming with the Minutemen, whilst getting particularly agitated about a swooping seabird. Really.” – Ro Cemm, The Line of Best Fit 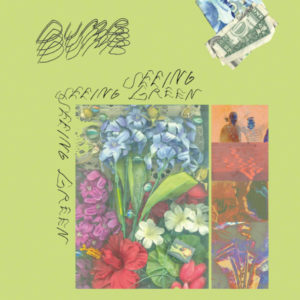