After spending nearly a decade recording and touring with the collaborative psych rock band Quilt, Anna Fox Rochinski has completed her first solo record, Cherry, out on Don Giovanni Records.

You’ll notice immediately that Cherry is a total departure from Quilt. Over the last few years, Rochinski realized pop was the most authentic vehicle for her and unites her varied musical influences under its umbrella. As she puts it, “I lost interest in chord-based guitar music and constructed this record mostly from melodies and beats and bass lines, with guitar as an accessory rather than necessary ingredient. That said, I think all my ‘psych’ inclinations will always be there, too.”

There are changes in the lyrical approach as well. She sees it as a second-wave coming of age record. “It’s the most personal stuff I’ve ever written,” she says. “It’s basically a break up album, but one that documents a time period ranging from the last few dying months of a six-year relationship and straight into the period following, when I was truly on my own for the first time in ages, catapulted into an insecure Trump-era world.” “Party Lines” is about learning new types of discretion to practice with men in our “fucked up political climate.” Cherry closes with the 7-minute “No One Love”, an expansive, horn-inflected rumination on compulsive attachment.

Cherry was recorded with the help of Ava Luna’s Carlos Hernandez and Julian Fader, who helped her bring together months of material and served as co-producers. Before the pandemic hit, Anna was scheduled to officially perform at SXSW with her new band, and had just begun playing live around NYC.

Though this is her first solo outing, Quilt released three full length records on Mexican Summer between 2011-2016 and toured North America and Europe extensively via High Road Touring and Paper and Iron Booking, respectively. Quilt completed several headlining tours in both continents, as well as opening on tour for bands such as The War On Drugs, Luna, and Woods. Anna’s songs have been licensed and used for sync placement extensively, most recently in Netflix’s “You”, and Quilt signed a publishing deal with Third Side Music in 2016. Their music was featured in many press outlets including NPR and Pitchfork, and was performed live on KEXP, Late Night with Carson Daly, and NPR’s Tiny Desk.

With all that experience, and this collection of new material, Cherry finds Anna Fox Rochinski ready and able to go down a completely new musical path. 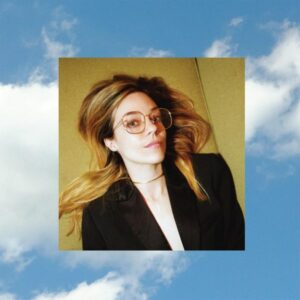